Working in the Corporate World. When Is Enough, Enough?

Everyone has their limits in life. We can only put up with things that irritate or frustrate us for a certain amount of time until we either have to step away and take a break or we completely explode.

When my children were much younger I experienced this feeling a lot. Multiple dirty diapers at once, temper tantrums, fighting over a toy, etc. were all reasons for me to often feel like I had to get a break from it or either run out of the house screaming. But the thing was is that after I dealt with the issue at hand and was able to have the grandparents take care of the kids for a day then all was good again. After all I love my children and it was very easy to recalibrate to start enjoying them again after a particular crisis had passed.

But what about in the modern day work world? Most of us don’t have to deal with dirty diapers thankfully and hopefully your co-workers are not fighting over a toy. At the same time however we can’t call our parents in to take care of our job while we take a break. We could run out of the building screaming but most likely we would be asked not to return the next day. 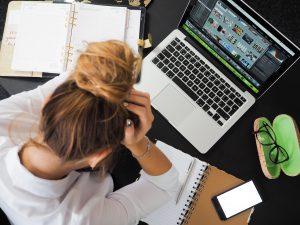 But when we do hit the point where we can’t take it anymore how do we know that it is time to say enough is enough?

Last week I had the pleasure of talking to two college friends from the past to see how they were doing and catch up on life in general. Both of them, in separate conversations, shared with me how bad their companies were when it came time to take a vacation. Both of them were officially given paid vacation by their companies but the circumstances as to how this played out were quite shocking to me.

Would any of these real life events that they told me about below push you to the point of saying enough is enough?

College friend #1 sent me a screenshot of a conversation between him and his boss regarding vacation. My friend had put in for vacation ahead of time like normal and his boss approved it but at the same time told him that he had to be within mobile cell distance at all times while on vacation and even carry his laptop with him so that he could drop everything and jump into work at a moments notice. So what’s the point of even offering someone vacation under those conditions? Why do that to an employee who has been faithful for several years?

College friend #2 told me that even though he had two weeks a vacation that he could not take it because of his work load. He said that even if he did take a vacation that when he got back that he would be so far behind in his responsibilities that there would be no way he could dig out and stay up with the pace that his job required. Again, why would the company back their employee into a corner like this?

To me, both of these situations would raise a red flag for me that it is time to start looking for something else.

Furthermore, it is shocking to me as to why upper management in companies like this does not realize that this kind of behavior burns people out as well as creates extreme disloyalty. Why would anyone want to continue working at a company long term that treats their employees like this?

So back to the original point of this article, when is enough, enough for you?

What does it take for you to finally say it is time for a change in your life and make the first step to make that change?

How far will you let them push you?

When you have had enough however there are alternatives that can set you on a path to freeing yourself from your employer pushing you to the extreme.

The first step is up to you!

« Previous post link What is the Laptop Lifestyle and How Can You Live It?
What Happens When You Don’t Watch Where You Are Heading In Life » Next post link
Share via
Facebook
Twitter
LinkedIn
Mix
Email
Print
Copy Link
Powered by Social Snap
Copy link
CopyCopied
Powered by Social Snap
We use cookies to ensure that we give you the best experience on our website. If you continue to use this site we will assume that you are happy with it.Ok